Smelteverket, the longest bar, had been a partner and donator since the launch of oslo soup. This time, they offered to host us in their cosy bar. 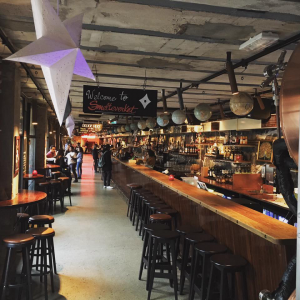 How convenient that they had a kitchen for us to warm the soup and a scene for our pitchers to shine ! 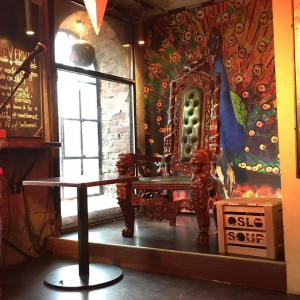 Our soup box next to the throne !

Let’s talk about food first, it is important !

The audience had the choice between three delicious soups: sweet potato-coconut milk soup by Smelteverket, mushroom soup by our great supporters Pan E Nus and a carrot-ginger delice by Ficus. Guess which one had the most success? All of them 😉 A cup of them went fine along with delicious bread and olives.

The choice of cakes was once again amazing, we are lucky to have so generous donators ! 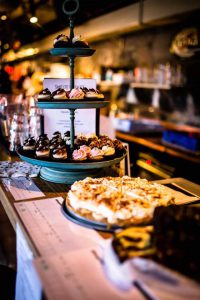 Check out our partners page to know who contributed so generously to our success !

I’m getting hungry so let’s move on to the core of our business, projects for Oslo and its people.

Our first pitcher was Michael for “New to Norway”. Based from his experience as an American in Norway and his contributions to social network groups for foreigners, Michael will publish a book with the recurring questions and tips expats could need when settling. 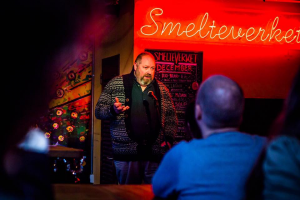 Michael from Nordland Publishing talks about “New to Norway”

The second project was entitled “Made In Tøyen”. Tibeb Artisans Co (represented by Laura) and Kulmis (with Shamsa as ambassador) want to join forces to create a collection of interior design item created by immigrant women in Oslo, bringing them together by teaching them the necesary crafts (sewing and others). 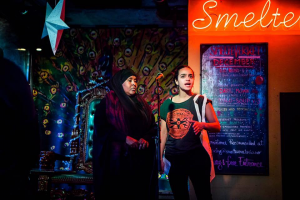 Laura and Shamsa rocked it for Tøyen Unlimited. 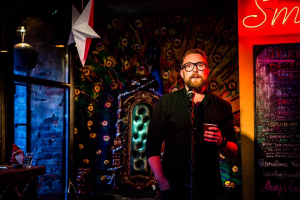 Last but not least, Anetta Lucero pitched her project “A Friend for the Forgotten”. Although she had to jump in without much preparation (huge thanks to her for not filling in that free spot we unexpectedly had), she was impressive in talking about her association that sends volunteers to talk and keep company to the homeless and lonely. 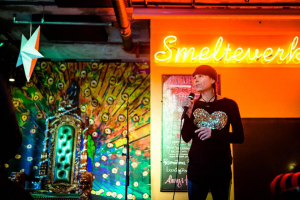 Anetta founded “A Friend for the Forgotten”

I am sure it was a tough decision for the audience, but the ballot declared that our amazing 4998NOK pot would go to Tøyen Unlimited !´They also won a workshop with “Thunderwave” entreprenor’s advice company. They were accompanied by Hooang, who pitched at our second event for “Shood”. 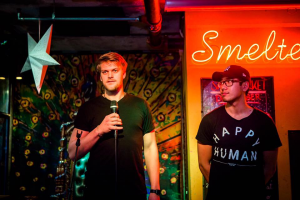 Thunderwave offering an extra price to our winner ! (Can you recognize an earlier participant to oslo soup? 😉 )

Thunderwave  offering expertise to Tøyen Unlimited means that oslo soup is now also stirring networking opportunities alongside micro-granting. We are so proud to have brought such bright minds and generous hearts together !

Tøyen Unlimited was, however, not the only ones to go home with a present from that evening. Four members of the audience were also the lucky winners of our very first raffle ! Anyone who donated anything over 50kr at the door was given a raffle ticket.

Lysløypa donated one of their books of coupons to discover Oslo.

Giu’s Delicatessen in Torshov donated a box of delicacies from Italy.

We hope that gave an exciting twist to the afternoon for our visitors 🙂 We are incredibly grateful to the raffle prize donators for their generosity.

Such was our last event of 2016. A great success from our point of view, we hope the audience and the pitchers agree !

To our readers: best wishes for 2017 ! May it be filled with soup and generous projects !

PS: one last thanks to our great photographer: Sadan Ekdemir !