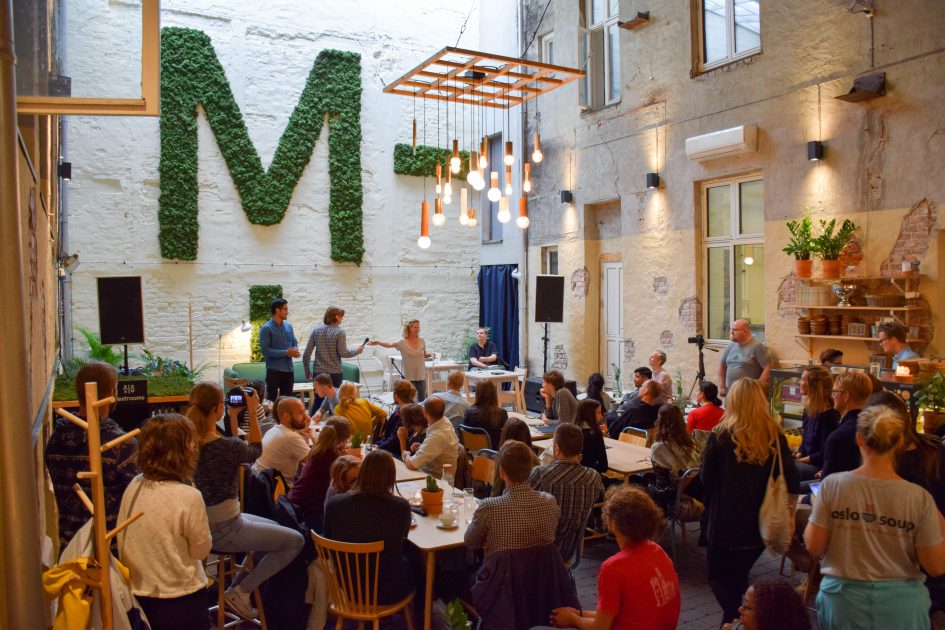 The following projects were featured at our second event on August 28th, 2016 at MESH.  Project #3, Fashion for Good, took home the winning donations and all did a great job!

On August 28th, Stian and Hoang pitched about Shood.  Read a bit from their proposal:

Shood is a platform that allows students to sell/share/order food from each other.

We want to offer students more choices regarding food, and we want to do that by providing a platform where students can cook, eat and share homemade food.

This idea matters to us and the city of Oslo, as it contributes to cheaper and healthier food, empowered by increased social interaction between the local students, and reduced food waste. As we are/have been students in Oslo, we know that it is hard to socialize with other students outside of school and organized events. So we want to tackle the problem of eating alone, by offering the students a platform where they can cook, eat and socialize with other students at the local student villages. In addition to the food and social aspect, we are trying to reduce food waste by letting people use up the ingredients to prepare extra portions which they can sell/share at Shood.

On August 28th, Eirik pitched about We are Oslo.  Read a bit from his proposal:

We are Oslo is a photo- and video-project about identity, diversity and integration in Oslo. The project is a photographic journey with the subway line number 2 through Oslo with the desire to overcome some of the many prejudices that exist, and to strengthen the sense of belonging among city residents. If one looks beyond the usual prejudices, and the mutual distrust, it is precisely this diversity, these differences from station to station, that makes Oslo a rich city.

The project background is the ever-increasing flow of refugees as well as we are witnessing a resurgence of extremisms in Europe, while in Oslo the discussion about the divided city goes on. How is the situation in our capital? What do we really know about our neighbours or the other side of the city we live in? A city is primarily a reflection of its inhabitants, and the sense of belonging is one first necessary step towards integration.

Based on the 26 subway stations along line 2, we envisage a photographic story consisting of 52 pictures: one portrait of a representative person from each station along the line, and one picture that gives us an insight into his or her neighbourhood. A series of mini documentary films will complement the visual part of the project where the portrayed people let us into their everyday lives in Oslo and allows us to become better acquainted with them.

The photographs will be exhibited at the subway stations along the line 2, but in reverse order. The images from Østerås will be exhibited at Ellingsrudåsen station and opposite, the pictures from Lijordet on Furuset etc, while the central stations are intended as symbolic meeting places where a larger number of images will be shown. We believe this virtual meeting between real people, as a first step towards a real meeting, will be a positive element in the everyday life in Oslo. Through the exhibition we hope to stimulate curiosity among the citizens and invite to debate.

In addition to the subway exhibition we have confirmed collaboration with DogA to implement a satellite exhibition in their premises, for example by displaying images on monitors. There are also plans to arrange a seminary in collaboration with DogA to discuss the project’s thematics. Another important partner is Dagsavisen who will publish a selection of the stories in their newspaper.

A copious website will serve as a final gathering place, a multimedia showcase where you can take part in an interactive journey with the subway and meet the selected oslo citizens through 52 photographs, 26 short video documentaries, 7 literary texts to each municipality, written by acclaimed writers with a special connection to Oslo, as well as more in-depth information about the 26 neighbourhoods through factual texts written by urban anthropologists.

A natural fulfilment of the project in the future would be a book release containing the photos and the literary texts.

On August 28th, Deborah pitched about Fashion for Good.  Read a bit from her proposal:

As a style consultant I want to create a project to work with support groups for people with low self esteem (suffering from depression, eating disorders, etc), helping them to be satisfied and confident about their image. I plan to do it through presentations, one-to-one sessions with the participants, explaining them the colours, styles and shapes which suit them and their personality, making them feel comfortable and happy about their image.

We are living in a period where our image has never been so judged. People are getting obsessed with having the ‘perfect’ body and the frustration for not reaching certain standards not rarely boosts or triggers a psychological disease. Oslo, not different than any other big city, has a lot of people suffering from psychological problems and I truly believe that using the fashion approach can help people to find their own unique beauty and style. My idea is to show people they can feel their best without mirroring in anyone else, but searching for their own style, based in their own personality.

On August 28th, Nadia pitched about Skala Opera Choir.  Read a bit from her proposal:

Skala Operakor is an amateur opera choir established in 2011. The choir has around 40 enthusiastic members of different ages, professions and nationalities, straight and gays, who are united together by the love of music. We are singing mainly an opera repertoire: Verdi, Tchaikovsky, Wagner, Mozart etc. We produce our own concerts as well as cooperate with orchestras and other choirs. You could have seen us in the TV show “Stjernekamp”, or in various theater productions and performances.

Our aim is to spread the joy of singing opera to a broader public, showing that opera is accessible to everyone. Setting high ambitions, we also aim at giving our members the opportunity to develop as singers and performers. We continuously work on our song technique and make as many staged performances as possible.

We are a group of people loving art that is very misunderstood and perceived as elitist.

Before our new Opera House in Oslo a national poll revealed that only less than 1 % of population were interested in opera. It took a long painstaking political process to approve construction of this largest cultural building in Norway since 1300. Millions of people attended it ever since. This had a great effect on the cultural life of the city.

As in Olympics, great achievements are rooted in sport being practiced by the general population. In case of opera we are like that local ski club..We delight local communities with our performances at the xmas concert.

We carry on a mission of sharing the joy of opera, showing that it is not an art of privileged, it is not elitist.

My mother has never heard me singing opera, she thinks opera is stuffy and off-putting. Singing opera involves a rather complicated technique, knowledge and understanding of music, However I am a part of this mission to share the joy of opera and show it is non-elitists.

Joining our choir require no prior training in music.

We have a fantastic aspiring conductor, who helps us to grow as a choir as and as individual singers. We can show that opera is wonderful and it can be accessible and affordable!

Our choir can help bringing this fantastic art to people around Oslo, both to singers who are members or want to be members of the choir as well as to a broader and diverse audience. Our recordings can help us spreading the joy that we feel every time we sing and perform.

Our choir also offers an open and creative environment bringing people together from many countries and cultures. Making ourselves more visible through new recordings, more singers in Oslo can find us and be included into this environment.