A Friend for Those Forgotten 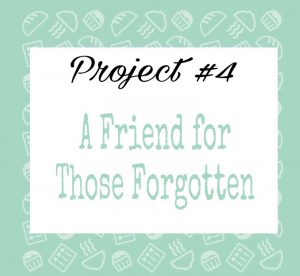 We are so happy to have Annetta present her project titled, A Friend for Those Forgotten, at our next event on December 11th!  Read more about the project below:

A few moments after exiting the train in Oslo, it began;
“Lady, please give me something, PLEASE, TAKE THIS!” The gypsy girl forced a small magazine into my chest. Six others had done the same within minutes. “No thank you”, I politely replied. I took a deep breath and remembered, “I am neither beneath nor superior to anyone.” After repeating this in my mind the irritation evaporated and I continued, through the crowd. The experience caused me to seek eye contact with those who were available. As I met the eyes of others I honored their worth. This simple exercise was powerful and connection took place instantly, many people nodded and smiled as they passed. I was enjoying this game when one man caught my attention, causing me to pause. His weathered face captured me and he did not release his gaze. He was a beggar, but in that moment he was not asking me for anything. I stood there looking at him, he looking back at me; seeing him, and being seen by him. After a bit, I sat down next to him. I said, “if you don’t mind I’ll just sit here with you for a while”. I didn’t know what language he spoke, but he grinned and scooted a little closer to me. As we sat I told him I was from Hawaii and I had just completed my immigration appointment. I said it was funny that people were wearing shorts and t-shirts yet, in my jacket, pants and cap I still felt chilled. He chuckled yet said nothing. Soon somebody dropped coins in his tattered cup. He looked at me with surprise, a moment later some more coins appeared and he made a “Whoop” noise, shaking his boney finger at me and grinning. We were laughing as his next customer made a deposit, and he slapped my back like an old chum. Time passed. I gave him a hug, said goodbye and stood to walk away. I felt a tug on my ankle. My companion stood to his feet, and in English said, “that was more kindness than I have received in years. Will you do something for me?”
Touched, I asked, “what do you wish?” He said, “Get yourself a big ice cream as a gift from me. You’ve healed my loneliness”
Tears flowed as I walked back toward Central Station and I was no longer irritated by the gypsy girls and their work.
As I ordered the ice cream my heart was exploding with gratitude.

“A Friend For Those Forgotten” is a humanitarian project for alleviating the suffering caused by human loneliness, and to promote compassion, kindness and respect for every human being.

Through the belief that compassion turned in to action can positively impact the world of every individual, I conduct heartfelt visits of friendship for human beings who feel lonely and forgotten.

Why does this idea matter to you and to the city of Oslo?

I was initially inspired by an elderly man who wandered alone in the street near my home. After forming a friendship through mutual respect and simple conversation, I noticed a transformation in his demeanor, alertness and level of joy. My belief that every individual should feel valued and cared for prompted me to take action. That action has led to hundreds of visits with the elderly, disabled, incarcerated, homeless and has prompted the development of “A Friend For Those Forgotten”. This idea matters to me because compassion, kindness and time is a gift that can be offered by anyone to anyone and I am willing to be a person who offers these things and who leads the way for others to do the same.
The city of Oslo benefits by the empowerment of human beings offering themselves to those who need to be seen and loved. The ideology of kindness spreads and increases the quality of life and general positivity within a city. In addition there are health benefits to addressing the epidemic of loneliness.
According to a new study revealed in Perspectives on Psychological Science: “Social isolation — or lacking social connection — and living alone, respectively increase mortality risk by 29% and 32%.”

Some of these potential health consequences include heart disease and stroke, increased stress levels, decreased memory and learning, alcoholism, and altered brain function. Because loneliness disrupts the regulation of cellular processes in the body, it also predisposes those suffering from it to premature aging.

How will you use this microfunding?

The micro-grant funding will be used to further develop my personal mission and services into a legitimate “start-up” foundation. This will enable the creation of needed aspects such as website development, consultations, event planning for awareness, outreach programs and education for those interested in participating. In addition funding would greatly increase the possibilities in making an impact during individual friendship visits. My goal is teach others how to affectively participate in visiting the lonely.
I often take supplies to those I meet and I have a vision of not only sitting and talking with those in need but doing activities with them that help them to feel more integrated within their world.
Taking a lonely elderly person or homeless person to lunch at a restaurant instantly changes their self-perception and can lead to increased feelings of acceptance… which leads to ever more feelings of belonging, the possibility for life changes, better societal involvement, improved health and ultimately participation as a visitor for someone else.

What elements of community or sustainability will be addressed with your idea?

Many elements of community are addressed by this concept.
The participation of those willing to offer compassion to the lonely and forgotten members of our society will be bonded by a strong sense of community consciousness.
Unity and solidarity are derived from living in a definite locality, such as Oslo. By understanding some of the complexities, complications, and confusions within the life of just one member of a community, insights are brought into the collective emotional identification of it’s members.

This project includes all aspects of social life. Participation welcomes everybody regardless of color, age, race, prior community involvement, level of education, occupation, personal relation,
handicap, religion or any other factor. “A Friend for Those Forgotten” actively reaches out to all citizens, encouraging their participation.

In addition this project promotes community health. Experts report that when you focus on someone other than yourself, it interrupts usual tension-producing patterns.
Moods and emotions, like optimism, joy, and control over one’s fate, strengthen the immune system and create more opportunities for positive social interaction.